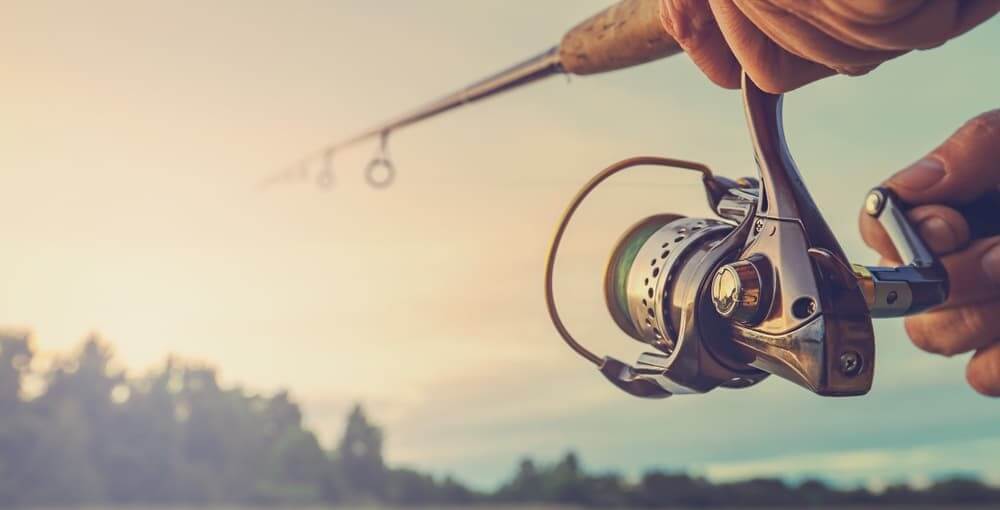 We’ve all been there – picking up angling as a new hobby and looking for a new spinning reel. You’re very excited to get started with using a new reel.

However, the excitement fades away when you delve into finding the right spinning reel for yourself.

When you don’t know how to choose a spinning reel, the variety of products will overwhelm you to the core.

Not only are spinning reels essential to determine your fishing quality but also comfort.

Therefore, you must know how to choose the right product for your fishing and angling requirements.

We have created this detailed buyer’s guide to help you make an informed decision.

What to Consider When Choosing a Fishing Reel

Over the years, spinning reels have surpassed any other reel form to be the most popular kind. They influence the way you perform and reduce your learning curve.

They are the best tools for beginners to learn. Most experts also like them for the reliability they offer.

The number of choices available for spinning reels is overwhelming and confusing. Therefore, in this section, you will find out how to choose a spinning reel.

Think of the reel’s size as a car engine’s power. You won’t want to buy a Mustang if you’re looking for an in-city affordable car. Similarly, it makes no sense for you to buy a 5000-size reel if you’re targeting perch.

A spinning reel’s gear ratio can be defined as the ratio between the number of bail arm rotations per a full turn of the reel’s handle.

The gear ratio influences the spool’s speed and efficiency. Let us have a look at the different gear ratios and their compatibility below.

Line capacity is your spool’s capability to hold a certain length of the line. The line capacity is dependent on the line’s diameter and fishing purposes.

We recommend getting reels with deep spools if the fish you generally target puts up many fights. You will have to use lines with thicker diameters since the more viscous the line, the less the possibility of it breaking in the water.

The drag system influences the amount of fight the reel can put up with the fish. Therefore, the reel’s overall power is dependent on its drag system design.

The rear drag system is the one that features the drag knob at the rear end. Therefore, the drag mechanics run throughout the reel’s body.

On the other hand, the front drag system features the drag knob on the front. They can produce much more drag pressure and hence, are preferable.

There are only two handle types in spinning wheels – a single handle system or a double handle system. Whichever you want to use comes down to personal preference.

While choosing a spinning reel, it is best to get one with anti-reverse handles. These handles ensure zero backward motion, allowing for a better hook set and better fishing accuracy.

Most spools are either made of aluminum or graphite. Not only does the material influence the fight a reel can endure, but also the reel’s overall weight.

The number of ball bearings has a slight yet significant impact on a reel’s performance and longevity.

Experienced anglers will tell you that the larger the ball bearing in a reel, the smoother the function.

However, it is not only the number but also the bearings’ quality that influences the reel’s smooth functioning.

It is important to note how the reel’s price influences the quality and number of ball bearings used. If you choose a high-priced reel, naturally, it will have high-quality components.

Therefore, the higher the number of the bearings, the smoother the reel. However, that is not the case with economic reels with economic parts.

Whether you are going to use the reel in saltwater or freshwater is a factor that s often ignored by beginners. However, this is a crucial thing you should consider while buying a spinning reel.

The Different Types of Fishing Reels

You don’t know how to choose a spinning reel by only following the above-given considerations.

You must consider the different types of spinning reels and choose the one best suiting for requirements. Below, you will find a detailed explanation of all the fishing reel types and their uses. 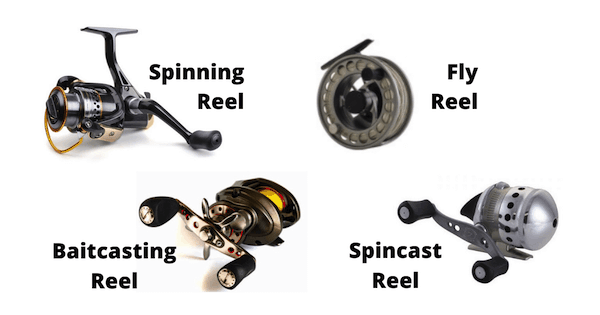 A spinning reel’s head is generally very soft. Therefore, it is not the best reel to catch big fish. However, it is great for beginners learning how to catch smaller fish that do not put up too much fight.

The best thing about spinning reels is that they make a sound every time the line begins opening. Therefore, you can easily understand when a fish has been caught.

Another essential thing to note about fishing reels is how lightweight they are compared to other fishing reels.

They are used to wind the line directly into the spool, allowing the process to be quicker and more accurate. Baitcasting reels are perfect for bigger fish since they offer higher drag.

Using these reels requires a lot of practice, accuracy, and control. Therefore, they are reserved for experienced anglers.

They feature a braking system to adjust the spool’s tension knob. Consequently, it allows for higher versatility and control.

Spincast reels are among the most efficient and lightest fishing reels. Their casting method is very different from other reels since it requires you to control the handle and a knob at the back.

The know allows the line to be ready to be cast, and the handle controls the cast length.

They are perfect for fishing in small areas. Therefore, you can hardly use them for professional fishing.

Trolling reels usually sit at the higher price range of fishing reels. You will hardly find any budget trolling reels since they are characterized by their graphite or carbon fiber construction.

They are rigid and sturdy. Therefore, they are best used to catch big and strong fish in the middle of huge water bodies.

They are designed similar to baitcasting reels but have larger line capacity and sturdiness. Trolling reels feature larger spaces between the gears.

They also have an attached level to allow for quick line winding. These reels are also generally used by experienced anglers.

Fly reels are the most affordable fishing reels out there. They are perfect to use in small freshwater areas. They cannot sustain the pressure of being used in salt water due to their easy-going construction.

Flywheels are straightforward to use and feature an effortless mechanism. They are also very easy to install. You will have to attach them to the bottom and end of the fishing rod.

Therefore, wining lines in them is also very easy. Flywheels are perfect for people who like to fish casually or are only beginning to learn the art.

Components of a Spinning Reel

While learning how to choose a spinning reel, you will also have to learn about its different components. Given below is an explanation of each spinning reel component and its use.

How Does a Spinning Reel Work?

The spool’s safeguard wheel discharges the fishing line when you prompt it to cast over the surface of the water. As you rotate the handles, the spindle moves and either wrap or extends the spool line.

You will hear a sound from the spool whenever there is a fish stuck on the line.

This sound comes from the line being pulled off the spool due to the target’s fight. You can adjust the drag strength to determine the speed at which you want the line to wind or discharge from the spool.

How to Tie Line on a Spinning Reel? 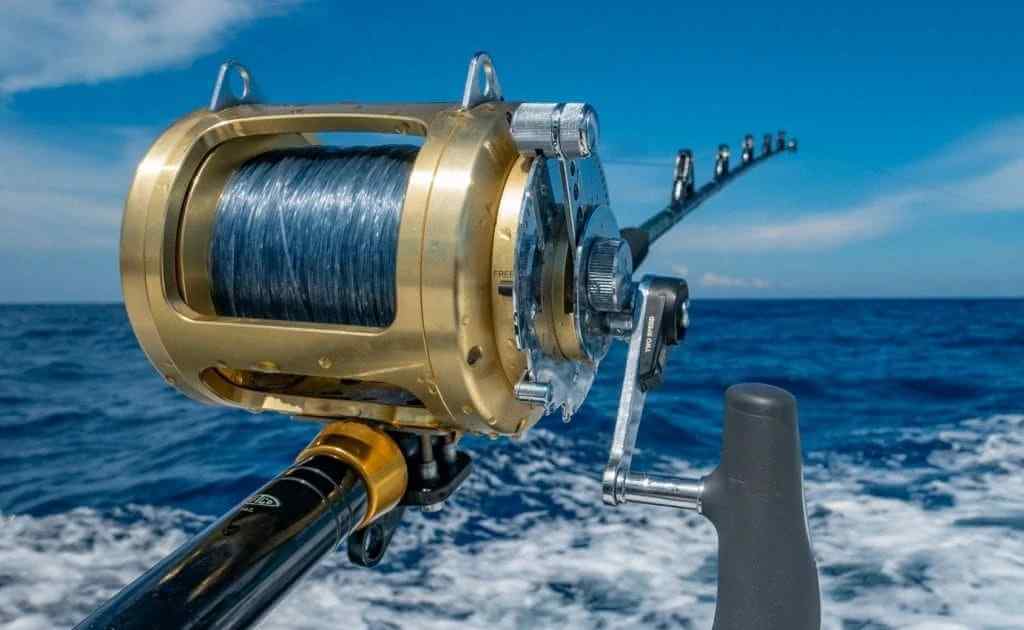 Equipment You Will Need

You must follow the given steps to tie the line to a spinning reel effectively.

How to Fix the Drag in a Spinning Reel?

Fixing a suitable drag on your spinning reel makes a substantial difference in your fishing ease.

The drag keeps the line from breaking as a fish puts up a fight against the line. Drag plates allow the line to be pulled from the spool to prevent extra strain on the reel.

Fixing the perfect drag is extremely important since the target might escape if the drag is too low.

On the other hand, if the drag is too high, the line might end up breaking easily. The easier reels to fix drag on are either spin-cast reels or spinning reels.

Since we are talking about spinning reels, particularly in this article, let us discuss how you can set the drag on them. Follow the given steps to fix drag on a spinning reel. 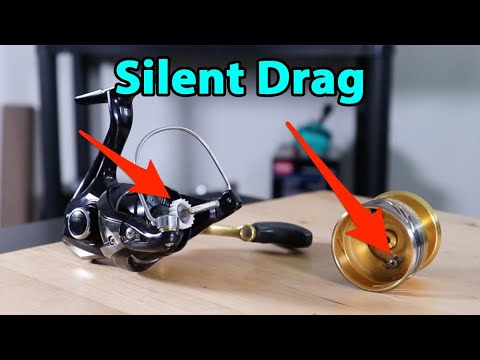 Spinning reels and the reels of choice for most anglers, no matter their fishing experience.

They are perfect for beginners because they do not have a learning curve as the bait caster reels. Season anglers trust them because they are effortless to use yet reliable for small game.

Spinning reels hail over the other fishing reels due to their ease of use and high-performance. Choosing the right spinning reel influences your overall fishing performance.

Therefore, it is crucial to know how to choose a spinning reel. This article is a one-stop solution for all you need to know about choosing the right spinning reel according to your requirements.

As an Amazon Associate I earn from qualifying purchases. FishingKnight.Com is a participant in the Amazon Services LLC Associates Program, an affiliate advertising program designed to provide a means for sites to earn advertising fees by advertising and linking to Amazon.com. *Amazon and the Amazon logo are trademarks of Amazon.com, Inc., or its Affiliates.